By anneOctober 2, 2009Meetings & Publications
No Comments 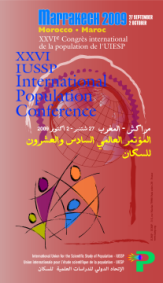 I have to apologize for the paucity of blog posts this week – I’ve been attending the IUSSP International Population Conference. While there is lots of talk of sex, and one might argue that, in fact, sex is one of the key factors influencing population (haha), the act of sex, desires, pleasures, and the like have had scant mention.

On the other hand, euphemisms for sex abound. I was at a presentation earlier in which “coital dilution” was discussed. Coital dilution? Let’s consult the dictionary: sexual intercourse + adding a solvent to lower concentration. What on earth could they have been talking about? In fact, the presenter was referring to the fact that in polygynous relationships, a wife will have sex less, on average, than in a monogamous relationship. The hypothesis was that the man would have the same frequency of sex, whether monogamous or polygynous, only the sex would be spread, or diluted, between the wives. (Maybe “diffusion” would be a better term?) Hm.

Later, I heard some other interesting exchanges, in the session on age at the time of taking a second partner (as opposed to “age of sexual debut”, commonly referred to as “losing your virginity”). At one point, one of the presenters commented “Really, the problem is that we just don’t know why people would take a second partner.” Now, I know that what she meant was that we did not have any data examining why people do not just have one sexual partner whom they stay with for their entire lives, but the sentence was just so… ironic. I looked around the room of nodding people and wondered, “Are all of these folks still having sex with their first sexual partner and no one else??”. Sure, this offhand knowledge is different from data that you can analyze, but I find it difficult to imagine that learning of these reasons will really advance our knowledge or public health that greatly.

Has there been any pleasure at this conference? Yes, but not in the main auditoriums. There were some very interesting poster presentations, for instance one about perception of male condoms. This poster presented data that showed that men (I think in Tanzania, but I am not sure) preferred dominant Western brands of condoms like Durex, Trojen, and Manix, over locally produced or freely distributed condoms. The reasons were, on the one hand, concerns about quality – even the condoms distributed by NGOs were perceived as low quality, something I find particularly ironic from a public health perspective. But more interesting was the other factor, which was that the men thought the big-brand condoms were more pleasurable to use!