Annie Philpott and I have what can probably be termed as “every safe sex activist’s ultimate fantasy”. This fantasy is of a hot, delectable specimen of a man subtlety promoting condoms, insinuating the pleasure that they bring.

During a conversation we had on this topic, the man who came to mind was George Clooney, Hollywood’s alpha-male and quintessential bachelor who has the distinction of being voted the sexiest man alive, more than once.

We imagined George looking his usual dapper self in a tux, pulling out what is distinctly a condom wrapper from his coat pocket. All the while, George would be looking into the camera with a knowing grin and a twinkle in his eye. There wouldn’t be a need for a lot of words – the power of the imagery would leave enough to the imagination.  In foreplay parlance, this kind of gaze could only signify “tantalizing anticipation”; a languorous scrumptious build-up to steamy action sure to ensue.
Wouldn’t this be just the thing that would make women tear their clothes off and jump into bed?

Not just because it was George Clooney, but because such an ad would send a message to men that condoms are sexy and can actually ensure that you’re going to get some! Condoms could then, hopefully, be seen as a straight up, all-access pass to good nookie.

This was just a fantasy, which we presumed would remain as such.

So imagine my utter delight when I saw a commercial over the weekend with  Robin Padilla, one of the hottest male celebrities, and recently eligible bachelor of Philippine showbiz (he had just publicly admitted that he and his wife separated) endorsing Trust condoms.

In the Philippines, we may not have a George Clooney who struts the tightrope of unattainable bachelor and ravishing gigolo, but we do have our own Bad Boy of Philippine Cinema, Robin Padilla. 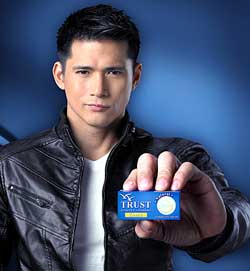 Robin earned the title of “Bad Boy” back in the late 90s when action films were in demand and he was the poster boy of this movie genre. As a point of reference, think back to the time when Chuck Norris and Arnold Schwarzenegger (before he was governor of California) dominated the big screen and defined “manhood”.  Such was the popularity of Robin Padilla. But unlike Chuck or Arnold, Robin also had oozing bad boy charm – think Colin Farrel or Jude Law. He was irreverent and tough in his action scenes, but always gentle with his leading lady, often tripping over his own words when making amorous proclamations.

Later, when action movies were no longing raking it in at the box office, Robin shifted to other roles that required him to work out and build–up his lean frame. The Bad Boy was doing Muay Thai and a bunch of other exercises to stay fit. Recently, Robin was featured on the cover of Men’s Health, Philippines looking as yummy as ever at 41 years old.

And now, Robin is endorsing Trust condoms, saying that real men use condoms and aren’t afraid to wear them. Looking straight into the camera with his trademark half-smile, half grin and a twinkle in his eye, Robin declared: “Before any action, put on some protection”.

He delivered this line in the national language of Filipino with such chutzpah, that to my ears, it was the equivalent of the hip: “No glove, no love”.

I sat staring at my TV screen, stupefied, excited beyond reason.

Here was the undisputed Bad Boy of Philippine cinema telling the boys what the girls have been trying to tell them all this time — “Condoms are so sexy that you’ll actually get hike up your chances of getting laid if you’d use them.”

While I was writing this article, I came across an article where one reporter asked Robin which flavor of Trust Condoms he liked the most. He answered, “I like ‘em all” and only smiled mischievously when he was asked the follow up question, “So you’ve tried all of the flavors?”

Ana is a freelance journalist and relationship columnist based in Manila, Philippines. She is an avid safe sex activist who, with little prodding, will confess that Robin Padilla has been the object of her bad boy fantasies since she was 17 years old. Read more of her musings on www.anasantoswrites.com.