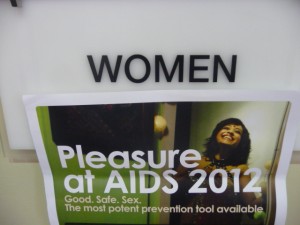 Sex has been eradicated from the conference, it’s almost as if it’s an airborne disease”

Okay so when we said that to WAMU radio we were feeling kinda blue and bio-medicalised out. They interviewed us after our satellite session to launch “Everything you ever wanted to know about pleasurable safer sex but were afraid to ask” . Also Facebook closed us out for three days for putting up one of our postcards : so we got a slap on the wrist for that ( free postcard for whoever guesses which one it was ) . Next time we will shut down. I’ll be careful but sign up for our mailing list he and for blog alerts here…

But after initial dismay at the lack of any discussions of condoms, safer sex or just good old fashioned sex in the first couple of days we started to cheer up because of the growing band of pleasure promoters  at aids conferences. We ain’t the single issue solo loonies anymore.

It kicked off with The Pleasure Project Hosted satellite at 7am Tuesday morning ….and people came ! Unbelievable and amazing. We didn’t go easy 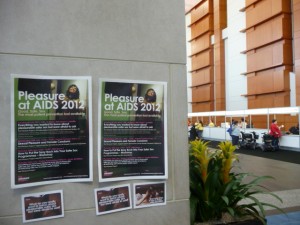 on our audience with a sexy safe condom demo (7:05 am ) and then launched the evidence review “everything you ever wanted….”  by posing questions particularly suited to that time of the morning such as ” is sex rational?” ” what is sexual pleasure?” and ” do positive attitudes to sex correspond to positive attitudes to safer sex ? “. Read it for the quick and dirty and more considered answers.

Next up Dr Scott Shelton blew our minds talking about the evidence she has analyzed and how it shows that making your sex education programmes and materials a turn on means people have more safer sex. So not only is it appealing but it works. We knew that but it we needed to see those randomised control trials prove it. See question 15 in the review for more on her research.

Next up was DKT International who last year sold 650 million condoms in 18 countries and  kinda know a thing or two about good safe sex. Chris Purdy and Daniel Marun spoke about how they do this globally  We especially….. Like the moped ad…. You’ll see…..  What we mean about dotted….. Hello Fiesta Ribbed. All those presentations are here with the session description.

Ttitsi Masvaware  from the University of Columbia in New York has been focusing her research on  young southern African women and asking them why they have sex. And hello. They are not just saying that they are forced or raped or trafficked. Despite what most of the development literature tells you. They schedule it in. They want pleasure. As she said ” she told me that she had him....” read her talk Masvawure TB Pleasure Project Satellite IAS 2012 copy and see question 2 for more on her brilliant research that shows young women can be  ‘active lust seekers”.

And lastly but not least and the best titled talk at the conference by Professor Gary Dowsett and socked  it to us with the ‘choreography of sex’, the improvisation in sex, the messiness of sex, the skills of sex , the joy of it and all of it they we don’t usually hear at AIDS conferences…read it here Dowsett presentation

But what has been phenomenal is the number of other sessions at this conference on pleasure. We are normally the pleasure cultists, not any more 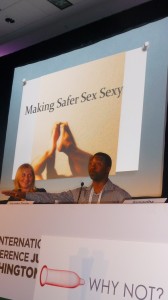 Other pleasure awards go to the IPPF youth group for their pleasure session on Thursday and keeping the pleasure flag flying with happy healthy ‘n’ hot. Some great questions and conversations “ how can you learn to flirt ? ” let’s remind ourselves that 48 % of new infections are in young people under 25 currently and we need to talk about safer sex and sexual skills for young people ALOT MORE . And another gripe there are just not enough of them at conferences presenting, sharing experiences and keeping the rest of us a bit more real. IPPF thrilled us with another condom controversy session on Sunday (with us and DKT) interjecting on erotic condoms which was standing room only. Go IPPF . You rock.

And another session I attended in the global village had interesting ways to start the pleasure conversation in the transgender community in Thailand. What I loved was that they did a pretend telephone call, as if a client was calling in and showed how they bring pleasurable safer sex into the conversation and talk anatomy and other sexy bits. How many chairs of sessions are brave enough to do that and lovely to see practical and tactical sex education at play.

So that’s a pleasure round up for now and it tales us up to Thursday at AIDS 2012 (there is more my active pleasure seekers)  and I have not even got to female condoms, the unsung hero of sexual health and some more pleasure awards he at aids 2012 .

You’ll just have to enjoy the delayed gratification… 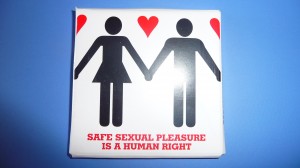