By anneOctober 20, 2010Uncategorized
No Comments 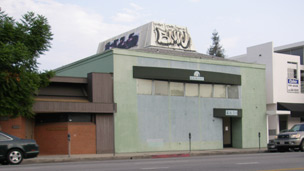 California’s multi-billion dollar adult film industry is in disarray after one of its performers tested positive for HIV. Several production companies have halted filming while doctors try to establish who the actor in question performed with, as the BBC’s David Willis reports.

Nothing about the drab stucco-fronted building on a suburban street in the Van Nuys district of Los Angeles invites a second glance.

Sandwiched between a beauty salon and an auto repair shop, a building more at odds with its exotic and uninhibited clientele it would be difficult to find – until you remind yourself that there is nothing sexy or glamorous about a sexual diseases clinic.

Business has been brisk at the Adult Industry Medical (AIM) Healthcare Foundation since it was revealed last week that one of the top performers in the business had tested positive for HIV.

As doctors at the non-profit organisation scrambled to track down and test the 20 or so individuals with whom that person had performed in the last month alone, other anxious performers converged on the clinic to get themselves checked. 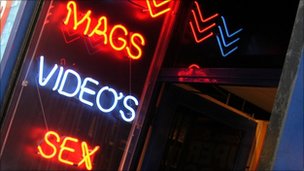 The adult film industry is going through tough times

“To say we’re in a state of panic would be an exaggeration, but there is certainly plenty of alarm.”

Neither the identity nor the gender of the person infected with HIV, the virus that causes Aids, have been released.

The valley’s sprawling suburbs to the north of Los Angeles form the epicentre of the American adult entertainment industry.

And another element was thrown into the mix, one which even the enterprising adult industry had failed to see coming – namely the enthusiastic amateur.

Of the 100 most popular websites in the United States at least five are portals for free pornography, and it is the suburban bedroom – not the San Fernando Valley – which provides the backdrop.

Although workplace safety laws in California mandate the use of condoms, there is a widely held belief that condoms kill sales – hence the law is largely ignored.

Aids activists have vowed to use the latest HIV scare as leverage in their campaign for tougher penalties against those companies that flout the law – yet some performers believe it should be a matter of personal choice.

At the AIM Healthcare Foundation I met a classically trained actress who moved to California from England to pursue a career as a singer and dancer.

She made her first adult feature at the age of 49, and now works full time under the stage name Magdalene St Michaels. None of her scene partners has worn a condom, but the HIV scare did not seem to have worried her.

“At least everyone in the industry is tested regularly. There’s always going to be a slight risk to what we do – but it’s a calculated risk and we’re all aware of it.”

In the light of the last week’s developments, he has reiterated his call to make condom use a requirement.

Meanwhile, AIM says it has carried out tests on everyone who worked with the latest performer to contract HIV, although it could be two weeks before the results are known.

For those involved, and their loved ones, that will probably feel like the longest two weeks of their lives.