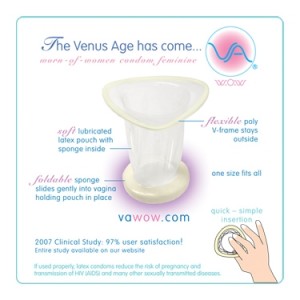 Maybe you’ve heard about the legendary “C-V Distance”? No, this has nothing to do with your resume, your level of physical fitness, or probability and statistics. This time it’s the distance between a woman’s clitoris and her vagina.

Back in February, Kim Wallen, a professor at Emory University, reanalyzed measurement data of women and discovered a correlation between distance and ability to orgasm during penile-vaginal intercourse.

[T]here’s even an easy “rule of thumb,” Wallen says: Clitoris-vagina distances less than 2.5 cm — that’s roughly from the tip of your thumb to your first knuckle — tend to yield reliable orgasms during sex. More than a thumb’s length? Regular intercourse alone typically might not do the trick.

This may be statistically true, but I would posit that this isn’t the end of the story.

After trying out a new model of the female condom this weekend, I was reminded of the great potential they have – not to decrease the C-V Distance, but instead to broaden the area that’s stimulated during “regular intercourse”. While Wallen suggests that couples can try other forms of stimulation, he should also mention this great tool for improving that regular ole penetration. I’m a disaster at estimating lengths, but I would say the WOW female condom certainly adds at least 3 cm, which brings a lot more of us into a position to have our clits stimulated during sex. Nice!