By anneOctober 19, 2009Sex in the News
No Comments 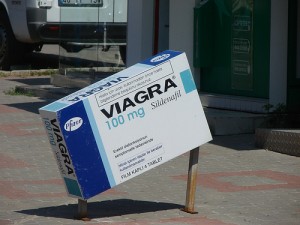 A lot of fuss was created recently about scientists for Erectile Dysfunction. The problem is that current treatments are orally administered, thus can take several hours to come into effect – and the effects can last for a long time as the drug is filtered in your body.

All of this seems to be putting aside the pre-Viagra findings of Masters & Johnson, whose clinic had amazing success in treating erection problems by encouraging communication and non-penetrative sex. Imagine that: when men feel less pressure to perform, and the sexual act isn’t dependent upon the hardness of his penis, he can relax, enjoy, and – what do you know – get hard. Their patients reported sex that was sexier, using different methods and talking about it more (not to mention that it was also safer).

But somehow, with the dawn of big pharmaceuticals, this idea seems to have been left by the wayside while we search for more effective prescriptions. I must say though, this one is just hilarious. “Firmly rubbing penis leads to stronger erections” sounds like (and is) a headline out of the Onion, not something to be taken seriously.