By anneOctober 23, 2009Sex in the News
No Comments

The media has given some attention this week to a new report from the UK’s NHS that shows condoms becoming more popular (for instance, The Times and The Daily Mail). I must say, the report contains a wealth of information. But it’s also kind of strange. Let’s first look at the pill/condom issue: 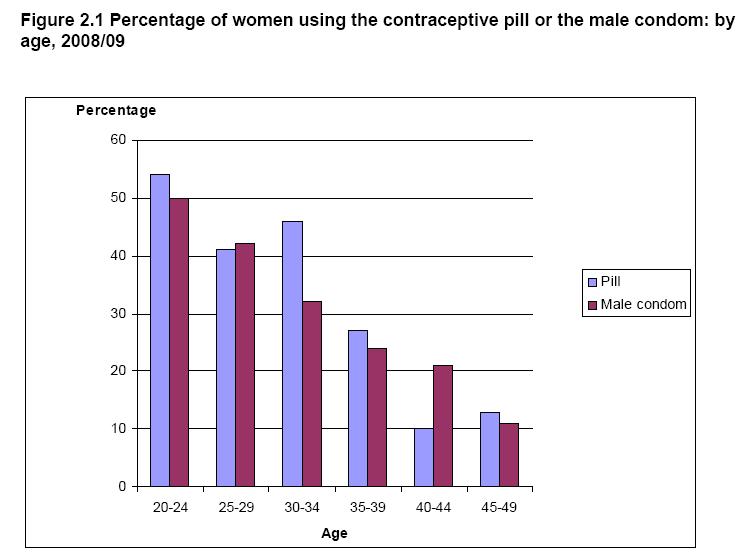 So, there has been an increase in the popularity of condoms, but for most groups, they are still less popular than the pill. The report doesn’t offer any suggestions about why the 30-34-year-olds have a seemingly high rate of pill use, nor on why the 40-44-year-olds have a low rate. Nor does it tell us if those differences are statistically significant. In fact, I couldn’t find any information about how many people composed each age group… so I have my doubts.

Anyhow, there were other interesting contradictions that the media didn’t pick up on. For instance:

Over half the men interviewed (59 per cent) who said they were not in a long-term exclusive relationship, but had had a sexual relationship in the last year, admitted that information on HIV and other sexually transmitted infections had no effect on their behaviour. However:
• 34 per cent said they had increased their use of condoms
• six per cent said they had fewer one-night stands, and
• six per cent took a test for sexually-transmitted infections when they changed partners.
(from the press release)

I find this fascinating! Unfortunately, the report doesn’t give us any indication of the reasons that these men did give for their behavior change. While the phrasing suggests that the study authors expected the public health messaging to have no effect (the respondents “admitted” it had no effect), it seems that a) it did have an effect and b) people don’t rationalize their behavior choices as resulting from health messages, but instead think of them in a different way. If we knew the reasons people gave for changing their behavior, then wouldn’t we be able to make more effective health messages? I smell a research topic here…

There are plenty of other gems of statistical knowledge in the full report, but if you don’t have time to read it, you can always just skip to the 2-page press release.