How does the condom ration shape up ?  36 condoms per person at AIDS 2012; 15 condoms per Athlete at the Olympics 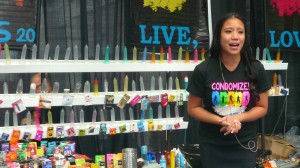 So that’s what we want at the next worlds AIDS conference. Gold medals  for the plenary speakers to say sex and even better good safe sex. It’s not much to ask. Medals for biomedical researchers ( you know who you are) to admit they may have had sex once at least. A sexy condom demo that’s gets televised in the opening ceremony ( umm sorry we got carried away…)

In fact 850,000  Condoms were distributed at AIDS 2012 and 150,000 the Olympics. That means 36 per each participant at AIDS 2012 and a mere 15 per Olympian. So we will stop our quibbling over here at Pleasure Towers about condoms and celebrate. The brilliant woman in the Condomise zone must have done at least 20,000 demonstrations over the week did well to distribute so many.

Anyhow back on it and who deserves a pleasure award for talking dirty at aids 2012. Those female condom ladies (and gents) are

Willing Victims at our female condom and pleasure session

putting a ring on it, rolling their hips just so and vagina , well lit up our day. We love the Chicago female condom ‘ put a ring on it‘ campaign and we did a sexual pleasure and female condom workshop with them and others in the women’s networking zone.  Lets just say our sexy female condom demonstration, got um refined.. 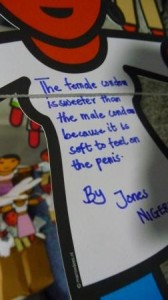 'sweeter on the penis'

The Universal Access to Female Condoms programme was attempting to break the world record for the longest  paper dolls chain with pledges for female condoms . There was lots of pleasure there on those dolls. See left and below.

Couple of other gold medals and loud cheers go to Kevin Mayer  in the brilliant Lancet medical journal session on men who have sex with men and HIV with his  ‘Sex is For pleasure’  statement. Sadly it still needs to be said. But great that an esteemed journal made the space to do that.

We think that’s about it for now, we still have to update you on our fabulous workshop and all the sudden sexy condom demo experts we have in the HIV prevention world.

Any other nominations out there for people and pleasure placements we missed ?  We had our pleasure net up but can’t catch it all.

Let us know who you think deserves a pleasure medal for service at AIDS  2012. 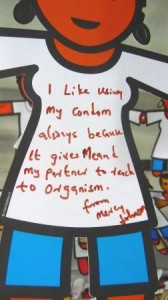 female condoms give me orgasms