So it’s a new angle on men fantasising about being with lesbians – now there is a rush to pretend to be one. So we at The Pleasure Project were musing on why. And came up with a few reasons.

1. You get to have sex with women.

2.  You get to live in a huge flat with ironed duvets, have great sex and swim in your pool just by drinking lots of coffee all day.

3. It is much easier to HAVE SAFE SEX all the time. Just by virtual of being a gal who loves gals. You can’t get unintentionally pregnant. There is a small number of documented cases of woman to women HIV transmission and much smaller risks than for straight women or gay men. Although women loving women still need to watch that mixing of sexual fluids on uncleaned sex toys or through oral sex. But all that stuff that dykes love – touching each other, wanking each other, eating chocolate spread off nipples, borrowing each others clothes and getting a cat – is good clean fun

So maybe those guys are just plain jealous of all that good.safe.sex. and the double nipples involved in it ?

So we have thought of a new campaign building on the ABC sex education campaign promoted from the US,mainly by religious groups and mainly in Africa to stem the HIV epidemic. We feel inspired by lesbian jealousy to add the D to the ABC. 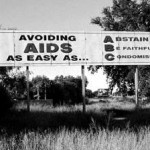