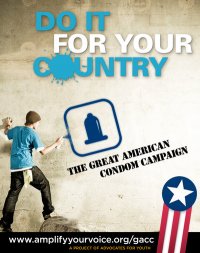 In the world of promoting safer sex, it’s true that university students get a lot of attention. But usually this attention is focused on their risky behavior, crazy parties, and multiple partners. This year, the Great American Condom Campaign decided to take safer sex to the grassroots level.

Instead of simply recruiting peer educators, this campaign actually sends supplies – 500 condoms – to students who volunteer to be “SafeSites”; places where other students can go for condoms and information. They also have a website that is also encouraging students to take action, for instance against retailers who will only sell condoms from behind the counter.

What caught my eye this time though was the story of a Texas State University senior who distributed the condoms she received through a “Safer Sex is Sexy” campaign. Though there aren’t many details on the website yet, she promises to post more photos and information. There is a video of her describing the success of her campaign:

I’m excited to see this kind of enthusiasm, and to learn about some sexy song lyrics:

At my booth I have a big banner that says “Safer Sex is Sexy” with a quote below by Lil Wayne “safe sex is great sex so you better use that latex cause you don’t want that late text that ‘I think I’m late’ text”. People see the banner from a far and I can see them whispering to friends “does that say sex on it???” YYES it does!

With inspiration like that, and 500 free condoms, I can barely wait to do it for my country!

(If you want to be involved as a distribution site, you can still apply through September 27, 2009.)