The pleasure of baring it all for a cause 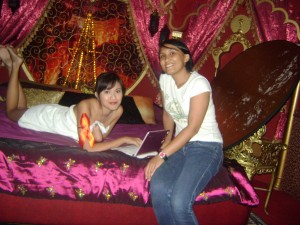 Romina and photographer, Mitch Mauricio in between takes.

Bali, the “island of the gods”, an indulgent pleasurable place of realization and enlightenment.

To me, Bali will be all that and more. To me, Bali is my place of liberation and re-discovered passion.

Ever since I came back from the International Conference on AIDS in Asia and the Pacific (ICAAP9) held in Bali last August, my head has been bursting with ideas.

During that four day conference, in the company of like-minded individuals, I could think freely and openly question views on sexual health. In the confines of the prudish Catholic culture of my country, I often face censorship – mostly, my own (self-censorship is a fate worse than writer’s block, maybe even death, for some journalists). In order to be taken seriously as a sexual health advocate, I have to choose my words carefully so that the messages of safe sex will not be selectively interpreted as just “sex”. I imagine that it is a dilemma that most sexual health advocates face.

But at the ICAAP in Bali, we were all speaking the same language. We all shared the view that in our different roles – health care practitioner, government official, researcher, and activist, and yes, sex & relationship columnist – we could influence behavior, change perceptions about HIV/AIDS and bring about a positive change.

After Bali, I began to think of more creative ways to push the envelope when it came to communicating the importance safe sex and making it sexy. And that was the inception of a shoot that we called “Dare to Bare” where real everyday people came out and boldly showed their support for World AIDS Day by wearing the red HIV/AIDS ribbon and nothing but that. There were no models or celebrities, only people who were HIV/AIDS or reproductive health advocates and dared to share the details of their experience or encounter with the epidemic.

To put the nudity of the shoot in context, I involved the Joint United Nations Programme on HIV/AIDS (UNAIDS) and the United Nations Population Fund (UNFPA), and consulted them on the messaging and research that could accompany the article.

Victoria Court – a chain of high-end luxury motels – and condom manufacturer DKT, Philippines, were invited to be part of this project and immediately agreed. Victoria Court allowed the use of their plush themed suites as the photo shoot venue and DKT gave away loot bags filled with safe sex goodies to all the participants. 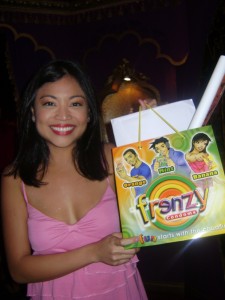 Mitch Mauricio, a professional fashion photographer, and fashion designer Alcs Porras who styled the shoot, jumped at the chance to work on the campaign, pro-bono.

“Dare to Bare” became a gathering of like-minded people who all have a responsibility to promote sexual health and provide proper education related to it.

I had thought I was going to have a hard time finding subjects to pose for the shoot, given the requirement of being an HIV/AIDS or RH activist, but even that was easy. As it turned out, the supporters came in all shapes and sizes.

There was a heterosexual guy who promoted condom usage; the heterosexual women who wanted to show that anyone can be infected and that HIV/AIDS is not a “gay disease”. Two people living with HIV, youth and members of the LGBT community came to make a stand. Others who lost loved ones to AIDS refused to mourn and instead took part in the campaign to celebrate the lives of those who had passed on.

Alcs, who lost 3 of his friends to AIDS in the 80s, also posed for the campaign, saying that, “This is one issue that is close to my heart.”

“I loved shooting the models. They all had interesting stories to tell and I like shooting people who have a stand or purpose in life.” said Mitch Mauricio.

The participants spoke about their own sense of liberation as well – the kind that comes with bravely making a stand, even if it means baring it all to do it.

– Ana is a freelance journalist and sexual health advocate based in Manila, Philippines. Since her Bali experience, Ana continues to find pleasurable ways of communicating safe sex – with or without taking it all off.  Her attempts at doing so may be accessed on www.anasantoswrites.com