Don't you just love a man who knows how to wear latex?

When it comes to safe sex, I like to put my money where my mouth is.

Cabbages and Condoms in Bangkok is one restaurant that apparently likes to do the same.

I had read about Cabbages and Condoms and their innovative concept of a restaurant that promotes good food, safe sex and responsible family planning and just had to marvel at the balls behind the idea.

On my last trip to Bangkok, visiting the restaurant was one of the must-do’s on my list.

I was instantly entertained — tickled pink actually — by the rich imagery of this place that I can only describe as something like a condom Disneyland. Life-sized mannequins decked from head to toe in colorful condoms lined the entrance. There was a Condom Man in a superhero outfit made out of red and yellow condoms; a cool jock type with his equally cool gal pal dressed in pills and condoms. There was even a Santa Claus dressed in condoms with unfurled yellow rubbers for his beard which were also used for the evening gown of the lady standing beside him. 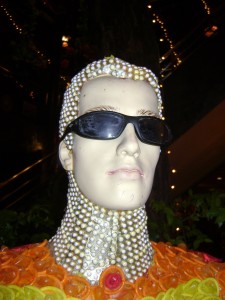 The entrance and stairway to the restaurant’s second floor was adorned with lamps and flowers all made out of condoms.

The creativity was mind-blowing! I touched Santa’s beard as I wondered if the condoms were still lubricated — they weren’t, in case you’re wondering. I tried to imagine how long it took to “de-lube” the prophylactics that these models were dressed in.

When I sat down and took a look at the menu, gastronomical delights like Yam Tung Yang or Yam Cabbages & Condom jumped out at me. This dish was actually Thai hot and sour salad of shanghai noodle with shrimp and chicken. The food was normal, and nonetheless delicious, but I found that certain dishes like this hot soup had sexy names.

To give you an idea of the effect of all these visual sensations, think of the times when you were relaxed and laid back enough to actually have a laugh in bed – didn’t that fall under “one of the best I’ve ever had” category? Eating at Cabbages & Condoms builds a similar excitement of suggestive anticipation in a fun, colorful way.

My night at Cabbages & Condoms was filled with good food and lots of laughter over the many witty ways that consciousness about safe sex was being promoted – from the dolled up (or rubbered up?) mannequins, the quirky menu choices, right down to the
two packets of condoms that were inserted in the billfold along with the change. 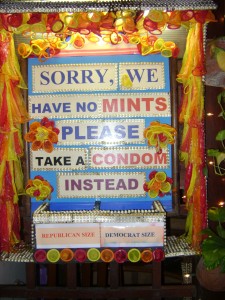 So would you rather take home a Democrat or a Republican?

“There are two”, the waiter explained in a polite subtle teasing way, casting a look at me and my date.

As we walked out of the restaurant, there was a sign at the exit that read: “Sorry, we have no mints. Take a condom instead.” There were two dispensers under the sign, one labeled “Democrat size” and the other “Republican size”. Take a guess as to which box had the bigger condoms.

When I passed the Condom Man Superhero, I couldn’t resist copping a feel and grabbed his crotch, giggling on my way out.

Cabbages & Condoms knows that laughter and wit are aphrodisiacs that when mixed with good food and condoms make the perfect recipe for a pleasurable safe romp that deserves to be in the “one of the best I’ve ever had” hall of fame!

– Ana is a freelance journalist based in the Philippines. She has since developed a predilection to Thai food since her visit to Cabbages & Condoms and continues to satisfy her cravings by eating at Thai restaurants in her hometown of Manila.